A great song.. A tribute for those people who were SOMEONE in this world for us.. and now watching us from above..

From me.. this song is for those who r not with me now.. and every single person that i truly miss..

For everyone I love..

The Truth is Revealed..

Are you a nice guy who has always wondered why the cocky guy -- the one who barely appears interested in the girl -- is usually the one who gets the girl?

Have you suffered from hearing the words, "You're a really nice guy, but I only like you as a friend," from a woman who you would do (or may, in fact, have already done) just about anything and everything for -- only to turn around and watch her date (or even chase) a guy who treats her like she's nothing special? And are you stumped wondering why she would date a guy who treats her like that when she could have you who would treat her like a princess and give her everything she wants? Well, you better brace yourself because I'm going to tell you a couple of secrets that you might not want to hear.

First, "nice" equates with boring and predictable. Look up "nice" in the dictionary and you find: pleasant; agreeable; satisfactory. In other words, average -- not exceptional, not exciting, and not sexy. I'll bet you've never heard a woman say she didn't want to date a guy because he was too confident, too passionate, or too exciting -- have you? But, I'll bet you have heard women say things like, "He's such a nice guy. He's so sweet and he's always there for me, but I only like him as a friend." Or, "He's such a good guy -- kind, thoughtful, generous, honest, loyal -- but there's no chemistry. He just doesn't turn me on." Sadly, I hear it all the time.

The fact is, Mr. Nice Guy, you cannot bore a woman into feeling attracted to you or into wanting to date you. And as obvious as that sounds, if you are one of those guys I described that is exactly what you are trying to do. And it won't work.

Please understand that I am not suggesting that you mistreat women or disrespect them in any way.

“What I suggesting is that you value and respect yourself more.”

To illustrate what I mean: The answer to the question, "Why does the guy who doesn't appear to care as much about the girl get the girl?" is simple: The nice guy cares too much, too soon. He has made the woman too important and too valuable and it shows in everything he says and does. He is too available, too eager to please, too accommodating, and he gives too much -- all without getting anything in return.

By doing so, he has made himself appear desperate, insecure, needy of this woman's attention, affection, and approval -- and he has stripped himself of any value in her eyes. After all, if he's already doing and giving everything, without her doing or giving anything - why would she value him? She won't. She is not going to value him any more than he values himself. What she is going to do is look for someone else, someone who she perceives as being more worthy, more confident, and more valuable.

“Once you need something, or you want it too badly, you forfeit your strength and lose all power of negotiation.”

You are in a position of weakness and you are perceived as weak. Someone (or something) else is in control of you, the situation, and it's outcome. Men in this situation appear to be anything but confident, strong, and exciting. More, they are perceived as being unworthy and as lacking value.

Translation: Things that are easily acquired, obtained, or maintained, without any effort or sacrifice, lack value... it's human nature.

The secret to why the cocky guy wins with women, over the nice guy, is that he is perceived as being a stronger, more confident guy with more value. How? He never invests everything -- his entire being, ego, and self-worth in what one woman's response or reaction to him is. He doesn't gush with compliments; he isn't always available; he doesn't give too much; and he knows he isn't going to die if a woman says "no" to him. More, his attitude is, yeah, I'd like to go out with you, but if I can't, that's OK -- I'm a busy guy, with exciting things going on, and lots of other options.

So those nice guys out there who wonder.. why things are not being right for you.. this is the truth.. 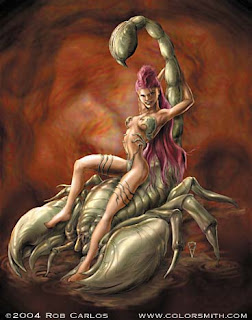 Mystery is your second name..

Dudes
* You need emotional excess to survive. You thrive on a need to be loved and
approved. In a word, you are invincible. Normally, you will surround yourself with
luxury. You love mysteries, and solving the puzzle of love is an irresistible challenge.
Marriage gives you a certain security, but you will want to get out of it before it
actually happens.

* In a relationship with perfect understanding, you will be tender, sympathetic and
considerate. You will repay your woman's loyalty with the kind of love most women
only read about and wish for.

Chicks
* You are magnetic, proud and totally confident. You are a strong woman, and hate to
flutter your eyelashes and look pretty. You can be overbearing and domineering,
sarcastic and frigid. You look for ambition in a man, and you cannot excuse his
weakness. You are fiercely possessive of your man. If he does not commit, you chase
him, till you can get a positive answer.

* You hate being possessed. You are also very stubborn. You refuse to see any
viewpoint but your own when emotions are involved. Your passion for living can be
all-consuming, yet in a real storm, your cool, calm reason and steely strength will be
a life raft.

Love Sign : Taurus
There is an irresistible magnetic quality surrounding you, a "come-chase-me" attitude
which is most alluring. When this works, your passions are unleashed with hurricane
force. If you let bouts of jealousy creep in, it may lead to an unwelcome result. You
might steer clear of a relationship since it is a clash of wills, but a clever lover is
someone who can dispel these notions to bring out the best in you.

Scorpio in Relationship
You like to be in charge, and you convey it right from the start. This can make for an
interesting and dynamic relationship. You are clear you want the absolute best where
romance is concerned. Any relationship, which gives you a sense of power, wins
hands down. You have a steely determination and a strong sense of what you really
want. You are quick in finding the right lover, and this makes life very easy for you.
As long as you win, there is harmony in the relationship.

Money
You are, in a word, wise where money is concerned. You are self-made, although a
surprising number of you inherit wealth. It's easy to see that you desperately crave
for money. Money buys you security, freedom, and, best of all, control. An
unshakable conviction that you will come out on top where finances are concerned
motivates you to work harder, no matter how long or how tough. You are more than
willing to make sacrifices for the grand prize. If there are reversals, you will generally
suffer them well, thanks to your quiet confidence. When the going is good, though,
you will remember your friends with uncommon generosity and are quick to support
favourite charities. In the end, you far prefer to accumulate money rather than spend
it. And you hate wasting it! Even so, there are times when nothing less than a Ming
vase will do. Go figure!
Posted by Dr.LovE at 3:21 AM No comments:

Damn.. what a week.. din have much time to write anything here.. although a lot of things happen.. i was bz with shooting and hockey training.. hopefully next week will be more free.. for those who still check my blog 10q very much.. dont worry.. soon i will be writing as usual.. take care..
Posted by Dr.LovE at 2:20 AM No comments:

Hie everyone.. hope everyone is good.. and had a great time during the holidays.. mine was a bit bz.. n full of virus.. haha.. In UPSI.. the guys team went until second round.. and the gals did very well and went until quarter finals.. and lost in a penalty shootout.. after coming back from UPSI went back to seremban.. Deepavali was like nothing.. stayed at home.. still felt tired.. and had body pain.. spent one week in seremban.. was boring.. nothing to do.. get up watch tv.. wait until the evening and play football.. thats all i did.. then had shooting.. in KL.. in brickfields and kajang.. and now back in Cyber for new semester.. still not very healthy.. but will be good soon.. this sem is gonna be a bz semester.. Had a shock to see Fid's ym display.. he looks like an alien.. hehe.. BOTAK.. haha.. so.. let the sem begin.. thats all for now.. cool..
Posted by Dr.LovE at 1:11 AM No comments:

Dr.LovE
A simple person with a different vision of mind.. Live a simple life so that others can simply live.. most importantly.. be Human !!!